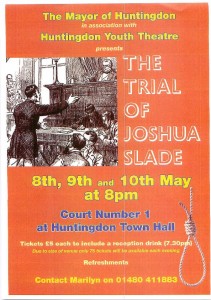 We are currently working on a very special collaboration with the Mayor of Huntingdon’s charities to perform this piece.  “The Trial of Joshua Slade” is a recreation of an actual court case with a script from local historian Richard Meredith and uses the actual records taken by the clerk on the day to put forward the evidence available and let the modern day audience make up their own minds.

In 1827, this case captured the imagination of the public, leading to large crowds congregating around Huntingdon court and crowding the streets, bringing the town to a halt. The murder of Reverend Josiah Waterhouse on the 3rd of July gained national attention and media coverage and the trial was monitored closely by central government and presided over by Mr Baron Garrow (the man who was the focus of the BBC series “Garrow’s Law” and first coined the phrase “innocent until proven guilty”) and The Lord Chief Baron Alexander.

In May of 2014 we are going to be performing this in the very court room the case was heard in nearly 200 years ago. For tickets contact Marilyn from the Huntingdon Town Council on 01480 411883, they’re £5 each (including complimentary drink) and in limited number, we are excited about this production and hope you will be too!

2 thoughts on “The Trial of Joshua Slade”