Huntingdon Youth Theatre is excited to announce that tickets are now on sale for ‘Cable Street’; a specially commissioned play by the National Theatre Connections.

One of the reasons we chose Cable Street is its close association with a member of the group, who had relatives living in the area during the troubles. This has added to the interest of our talented cast.

We are only partway through our Connections festival journey. We will be performing in Norwich’s Garage Theatre at the beginning of May.

Written by Lisa Goldman, Cable Street is about two girls growing up in London’s Jewish east end in the 1930s. Leah and Kitty are blood sisters, best friends, and more… But they get caught up in the political turmoil caused by Oswald Mosley’s fascist Blackshirts. As their passion and the political tensions grow, the forces ensnaring them can only get tighter and tighter until something snaps.

Hot on the heels of our successful production of Sinbadaladdin at Hinchingbrooke Country Park Centre, the group has been invited by the National Theatre to take part in the Connections Project for 2019.

The annual project brings together a number of youth theatres from around the country and places are highly sought after. HYT has been asked to perform a specially commissioned play entitled Flesh, by Rob Drummond. The play is to be performed three times in Huntingdon in early March and then at the Garage Theatre (Norwich Playhouse) on April 4.

This is our third invitation to perform in the Connections project. In 2016 HYT was invited to perform It Snows at The Junction, in Cambridge, and in 2017 performed Monstrum at the Royal and Derngate in Northampton and then went on tour to Wertheim, Germany, with the play.

The group have been supported by the Shakespeare at The George Trust, a charitable foundation that regularly makes funds available to local organisations, groups and individuals to further theatre and theatre skills in the region.

Richard Brown, chairman of the trustees of SaTG said: “We greatly value our long-standing association with HYT and it gives us special pleasure to be able to support young people’s involvement in major theatrical events such as the NT’s Connections Project.”

SaTG partly funds its bursaries using profits from its award-winning annual open-air Shakespeare production, performed in the Jacobean courtyard of The George Hotel in Huntingdon, and HYT is the recipient of the prestigious Mo Pearce Bursary in memory of the late Mo Pearce – former trustee, director and actress with SaTG.

Rehearsals for Flesh begin on January 8 at HYT’s home venue of Hinchingbrooke Country Park Centre, where the group meets every term-time Tuesday between 7pm-9.30pm. There is an opportunity for young actors, aged 13 and over, to be involved in the project. No previous experience is required to join and anybody interested, should contact HYT via its Facebook page, online at www.huntingdonyouththeatre.co.uk or by calling Dominic Whitehead on: 01480 380297. 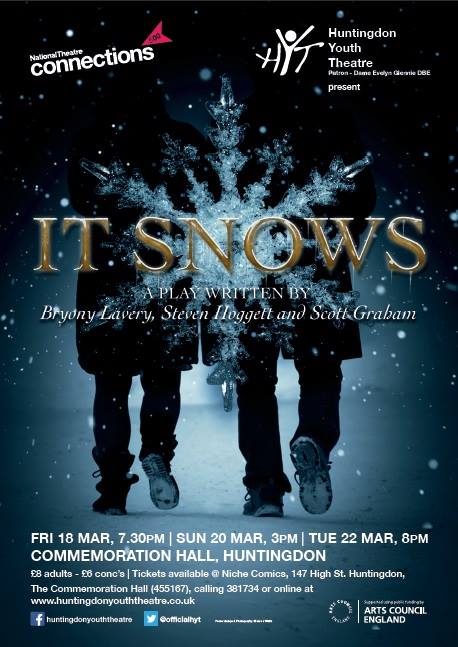 Well 2016 is just over a week old and already we’re hard at work. We’ve been working on our National Theatre Connections production of “It Snows” with director John McCusker in and out of meetings and working hard on creating the dynamics between the various characters we will introduce you to in March. Tickets are now available by clicking on the “Buy tickets” tab on the top of this very page!

Not only that but we’re also under way as we prepare for our third visit to the courtroom following our sold out performances of The Witches of Warboys and The Trial of Joshua Slade. This years show tells the story of “The Murder at the Meads” in Broughton relating to a case from the interwar years. Once again we are working with the Mayor of Huntingdons Charities and tickets for this play are now available by following this link and booking your date in court.

It’s going to be a busy year, it’s great to be back on the stage rehearsing after the Christmas break!

A little while ago we announced we would be working on the National Theatres Connections program in 2016. Last weekend director, John McCusker was working in London with the NT where he took part in workshops with other Connections directors and met the author of our production.

We can announce our Connections project is going to be the play “It Snows” by author Bryony Lavery. It’s an ensemble piece following teenage life in a small town through the eyes of aspiring photographer Cameron and wannabe actress Caitlin. We’re looking forward to this production, which we’ll be starting work in full as soon as we have finished with our production in December, Dracula (tickets selling very well incidentally. Get them by clicking the link on our web page!)