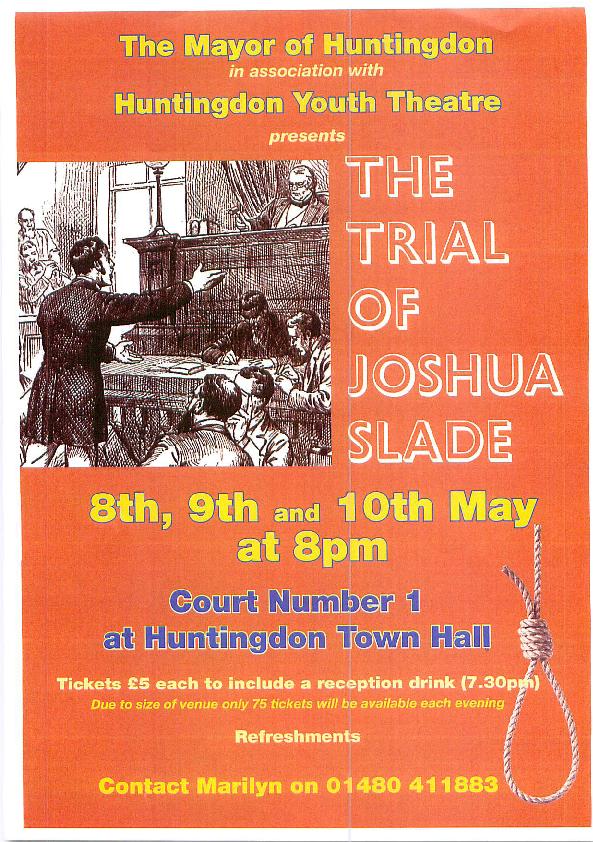 The Trial of Joshua Slade was performed in Court Number 1, Huntingdon Town Hall and was a recreation of a murder trial that took place in that very room 187 years ago on the 3rd July 1827. Performed over three nights to complete sell out audiences, some coming from as far afield as Canada, the recreation was able to capture the imaginations of our modern audiences in the same way as the 19th century crowds who filled Huntingdon Town Centre. Local historian Richard Meredith had long wanted to see this piece recreated on stage and tell the story of this 18 year old boy facing trial for murder, the story of the last person to be executed in Huntingdonshire.

The play was directed by Beryl-Anne Whitehead, who in researching the history of this piece spent some time in the national archives reading documents from the era and finding information relating to some of the key figures in this real life drama. We were fortunate in preparation for this piece that one of the descendants of Joshua, Douglas Slade who is a great, great, great nephew join us in court during the run, making the journey up from Truro, Cornwall.

The dress rehearsal of this production was recorded by Huntingdon Community Radio and first aired on a Bank Holiday, the 26th of May 2014

The production raised a figure in the region of £1000, for local charities supported by the Mayor of Huntingdon, Councillor Bill Hensley, at this atmospheric event.

Clerk of the Court – Dom Whitehead

Our modern audiences would go on to watch the case and the evidence displayed would make things appear there had been an injustice. Most of the forensics evidence was inconsistent and unreliable and the case relied mainly on the testimony of William Heddings, a friend of Joshua Slade who had been arrested and charged with stealing a pig from Mr Waterhouse and had already escaped Huntingdon Gaol previously.

The judge, Baron Garrow (he of “Gallows’ Law” fame) was uncertain of the verdict, highlighting that the evidence given by William Heddings appeared to be a prepared story, and deferred the execution. The exact sequence of events is uncertain now, but we do know that ultimately Joshua Slade confessed the murder. The details given in his confession would contradict some of the evidence presented in court but it is made clear, Joshua Slade had killed the Reverend and would be executed by hanging on Mill Common, 1st September, 1827.

Executed for the Murder of the Rev. J. Waterhouse.

The circumstances attending this atrocious case will be best described and understood by the repetition of the confession of the murderer, while lying in the jail at Huntingdon after his conviction of the offence for which he was executed.

It would appear that the unfortunate gentleman who was the victim of his crime was a person of most eccentric habits. He was possessed of a rectory, at Stukeley, near Huntingdon, of the value of about 400l. a year; and attached to the land which he held was an elegant rectory-house. His habits of parsimony had induced him to give up the occupation of the greater portion of this dwelling as a residence; and he had stored many of the best rooms, furnished as they were, with grain, the produce of his farm. A like feeling had excited in his mind an indisposition to pay taxes for more windows than were absolutely necessary to give light to the apartment which he used; and out of about forty windows in his house, two only were suffered to remain. He lived constantly in the kitchen, without any regular female domestic, and performed the office of cook for himself and his workmen. Every Saturday the reverend gentleman walked to Huntingdon market, a distance of between three and four miles, frequently driving his pigs before him; and after having transacted his farming business, he used to carry home his tea and sugar, and other necessaries for the week, in a basket. His known parsimony appears to have induced the criminal to commit the foul crime of which he was guilty.

It seems that Mr. Waterhouse was about fifty-five years of age; and the house which he occupied was situated nearly in the centre of the village of Stukeley, but stood alone in the farm-yard about fifty yards from the street. On the morning of Tuesday, 3rd July, 1827, the reverend gentleman arose at about five o’clock, and was occupied until about ten with his farming business. He then gave some instructions to one of his workmen, and retired to his own house; and between this hour and eleven o’clock the murder was accomplished. The body was first discovered by two farm-boys, who found it lying in a mash-tub; but in consequence of the eccentricity of the deceased, they were induced to suppose that he was only joking, and they took no notice of the circumstance. The truth, however, was eventually discovered, and it was found that the unfortunate man had been murdered in a most barbarous manner. Suspicion at once attached to Slade, who eventually confessed himself to have been guilty of this most atrocious crime, and he was taken into custody. Circumstances were then discovered which left little doubt of his being the guilty person, and upon his trial the jury returned a verdict to that effect. Considerable anxiety was entertained in reference to the case by the learned Judge, who deemed the evidence inconclusive; and the trial having taken place on the 1st of August, he respited the unhappy prisoner until the 1st of September, in order that further inquiries might be made. On the 2nd of August, however, the convict confessed the crime in the following terms: —

“On the morning of the 3rd of July, 1827, I went direct from the Swan public-house at a quarter past two, and got over the garden-wall. I was then fresh. I saw Peter Soby at his door. I went to a straw wall near the dove-house, and laid there till five in the morning. I had a sword hid in the straw wall about five weeks, which I had stolen from the Horse and Jockey public-house, Huntingdon. I drew the sword out, and left the scabbard in the wall, and I put the sword down my trousers by my thigh.

On my going out, I saw Mr. Waterhouse in the yard; but he did not see me. The garden-door of the house was not fastened, and I went to it and opened it; and I went up stairs and hid myself in the wool chamber from five until ten o’clock, intending to rob the house at night. While lying there, I went to sleep, and I dare say I snored. Mr. Waterhouse happening to come up stairs, heard me breathe; and coming into the room, he exclaimed, ‘Hollo! who are you? what do you do here?’ I then got up, drew the sword and laid hold of him. He wanted to go into the room where his blunderbuss was, but I would not let him. I led him down stairs, but nothing was said. He attempted to get away, but I would not let him; and when we got to the ground floor, I said, ‘Now, Mr. Waterhouse, if you’ll forgive me, I’ll forgive you; and if not, this is your death-warrant’ (holding up the sword.) He said, ‘No, I will suffer anything first.’ I then let him go, and he went to run by to the kitchen-door to call somebody; but just as he turned into the kitchen I caught him a backhanded blow across the jaw, and he reeled back, caught himself against the tub, and fell backwards into it. While in this situation, I struck him several times; and he guarded the blows off with his arm. He laid hold of the sword twice; upon which I drew it out of his hands and cut his fingers. I also stabbed him in the throat, which was the last blow; and he then said, ‘I’m done,’ and died immediately. There was no blood on me except on my finger, and one spot on my waistcoat, and that I wiped out directly. I didn’t hear the dog bark all the time; and he wouldn’t bark at me, for he knew me. The kitchen-door leading to the yard was wide open all the time, but no person came near the house. Having committed the murder, which was all finished by ten minutes past ten o’clock, I immediately ran out of the house, and I turned to the right and threw the bloody sword among some young trees. I ran away, and continued at work until seven at night; and then I went home, had my supper, and went to bed.”

A search was made immediately after the confession for the sword, and it was discovered in the place pointed out. It was lying within a few paces of the scene of the murder, and it is strange that it should have remained so long undiscovered.

The wretched man after this confession applied himself zealously to the performance of his religious exercises, and underwent the dreadful sentence of the law at Huntingdon on the 1st of September 1827.

Another source which we found interesting to use during the research for this case was this article taken from the Glasgow Herald dated August 10th, 1827.

Photographs and other Media

2 thoughts on “The Trial of Joshua Slade”