Here we are with the complete poster for our Connections 2020 project “Tuesday” along with the dates for our home performances! Tickets are available now so click on buy tickets above, through our Facebook page or calling the number on the poster!

We hope to see you there

‘It happened on a Tuesday…’ #ComingSoon #Connections2020

This year, HYT brings you Charles Dicken’s ‘A Christmas Carol’ at the Hinchingbrooke Country Park Centre.
Join us from Wednesday 11th – Saturday 14th December at 7:30pm for an unforgettable retelling of this much loved Christmas tale.

For more information, including ticketing information and pricing, please see our fantastic new poster shown above.

We look forward to seeing you there!

As the school term comes to a close we have our final piece. To finish we have a piece of devised theatre created by the members and directed by Graeme Hammond.

It promises to be a thought provoking and challenging evening, it is free and will begin at 7:45 and last for about 20 minutes.

Hot on the heels of our successful production of Sinbadaladdin at Hinchingbrooke Country Park Centre, the group has been invited by the National Theatre to take part in the Connections Project for 2019.

The annual project brings together a number of youth theatres from around the country and places are highly sought after. HYT has been asked to perform a specially commissioned play entitled Flesh, by Rob Drummond. The play is to be performed three times in Huntingdon in early March and then at the Garage Theatre (Norwich Playhouse) on April 4.

This is our third invitation to perform in the Connections project. In 2016 HYT was invited to perform It Snows at The Junction, in Cambridge, and in 2017 performed Monstrum at the Royal and Derngate in Northampton and then went on tour to Wertheim, Germany, with the play.

The group have been supported by the Shakespeare at The George Trust, a charitable foundation that regularly makes funds available to local organisations, groups and individuals to further theatre and theatre skills in the region.

Richard Brown, chairman of the trustees of SaTG said: “We greatly value our long-standing association with HYT and it gives us special pleasure to be able to support young people’s involvement in major theatrical events such as the NT’s Connections Project.”

SaTG partly funds its bursaries using profits from its award-winning annual open-air Shakespeare production, performed in the Jacobean courtyard of The George Hotel in Huntingdon, and HYT is the recipient of the prestigious Mo Pearce Bursary in memory of the late Mo Pearce – former trustee, director and actress with SaTG.

Rehearsals for Flesh begin on January 8 at HYT’s home venue of Hinchingbrooke Country Park Centre, where the group meets every term-time Tuesday between 7pm-9.30pm. There is an opportunity for young actors, aged 13 and over, to be involved in the project. No previous experience is required to join and anybody interested, should contact HYT via its Facebook page, online at www.huntingdonyouththeatre.co.uk or by calling Dominic Whitehead on: 01480 380297.

And you can join us too!

Tickets are now on sale for our Midsummer production where we will take you on a small walk around Hinchingbrooke Park as we follow Frodo on his quest to destroy the One Ring. Tickets are available both here and over on Facebook right now. Watch this space for where to get your paper tickets soon!

So as we finish Beauty and the Beast we move into the new year celebrating our 21st birthday! We’ve got together for the first meeting of the year and started work on some new projects we will be looking to perform in March and have a lot more planned which we look forward to sharing with you.

Thank you to all our past and present members, leaders and anyone else who has supported us over this time. It’s been a roller coaster ride and with us now being joined by leaders younger than we are, we look forward to many more years of accessible theatre for youngsters in the Huntingdon area!

So after a busy few months we’ve been working away on our production for the second year with National Theatre Connections. This year we are working on The Monstrum which we will be performing in March. So of course, the good news is tickets are on sale now! Simply click on “buy tickets” at the top of the page and we’ll see you there.

Tickets are as always £8 for adults and £6 for concessions. We hope to see you there! 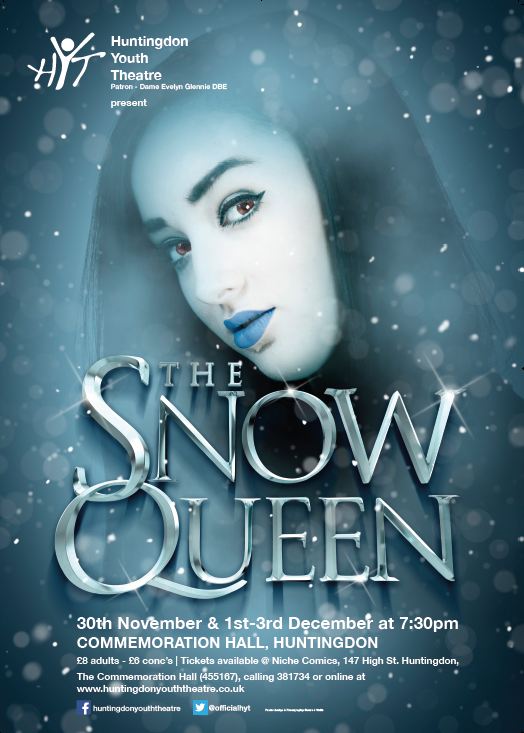 So after a very busy few months (with many apologies for being so quiet on here!) we’re back after the Summer to start rehearsals on our winter production of The Snow Queen! A great stage adaptation of the classic tale.

Tickets are available NOW from this page or via Facebook. We’ll have them at the box office as soon as possible. See you at the end of November!

It’s been a very busy couple of weeks. Last week we followed up on The Witches of Warboys and Trial of Joshua Slade by returning to to the court room for Murder at the Meads. A trial based around Walter Worthington, a man accused of murdering his young wife in Broughton. It was very well received and we thank everyone who came to see us over the five nights.

With one show finished, we’ve been straight into our National Theatre Connections project It Snows, we’ve had the technical and dress rehearsals and on Friday we can’t wait to go live. For tickets just visit the link on the menu bar of this site!